It begins with a box:
Every smart space age kid knew that Explorer 1 was the first U.S. Earth satellite launched on 1 February 1958. It looked like this:

So now that you know what to look for, let's get a look at what's inside that box at the top of this post. The Structoys 1958 battery operated Explorer and Vanguard Tacking Station: 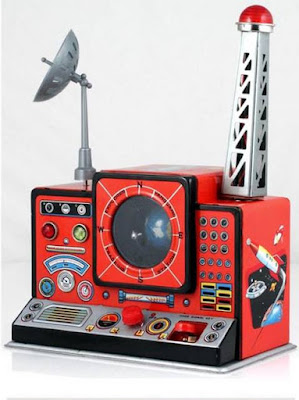 You'll first notice the 'radar scope' window - looking inside you'll see Earth which is lit by an eerie green glow when the station is in operation. Revolving around Earth are Explorer 1 and Vanguard 1. On the top left of the station is a rotating radar dish. The red and green lights below the dish on the console alternately blink on and off. On the top left of the console is a telegraph tower topped with a red beacon. Below the tower on the base of the console is a red metal 'code signal key' for Morse code telegraphy. A buzz can be heard as the code is tapped out on the signal key and the beacon atop the tower blinks. A red nob on the center of the base controls the on/off function of the unit.

The Tracking Station is a tin litho beauty with super graphics all the way around.

With a unit like this a kid's imagination could step out of internal space and right into the world of 3D -  creating a realism of imagination that could not only be seen and heard, but touched as well. And that's way cool.

The images in this post are via Grand Old Toys - this particular pristine, completely functional unit in the original box was sold online for $610.

H/T to Luis Cesar for reminding me about this fab space age toy.
Posted by Unknown at 6:27 AM