The Pyrotomic Disintegrator pistol is considered by most collectors as the Holy Grail of ray guns. Doc Atomic at Astounding Artifacts best describes its allure:


For many people, myself included, this is the very ideal of a vintage space gun. It's got rings. It's got vents. It's got a sweeping design that conveys the poetry of space flight. It's even got its name spelled out in a cool, 1950s font that's underlined by lightning bolts. That's right, lightning bolts! And did I mention it's called the Pyrotomic Disintegrator? If anyone tries to say that's not the best name for a ray gun ever, that person's looking for a fight. 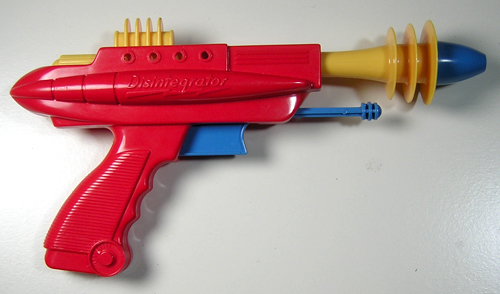 There was a Pyrotomic Disintegrator rifle manufactured by Pyro Plastics shortly after the pistol.

Toy Rayguns lists the Pyrotomic Disintegrator rifle as one of the 'rarest (and most beautiful) toy ray guns in the world.'


...being perhaps the rarest of all space rifles, The Pyrotomic Disintegrator Rifle is also the most beautiful. Powerfully sculpted with a fluted barrel and an undulating stock, this wonderfully designed toy exudes a sense of delicacy and techno-scientific power.


Both the Pyrotomic pistol and rifle are very hard to find in good condition. Having been made with brittle plastic makes the guns fragile and susceptible to cracking and breaking if dropped. The shooting mechanism was cheaply made and is often not working in the surviving guns. So, not only are the Pyrotomic guns considered the most beautifully designed, they are also the most scarce. Perhaps sometime in the future someone enterprising might recreate the guns based on G. C. Schaible's 1953 patents - the question is, would the beauty of the designs carry without the 1950s sci-fi space age mystique?
Posted by Unknown at 6:01 AM