Captain Video and His Video Rangers was a ground breaking sci-fi space adventure television series that aired between June 1949 and April 1955 on the American DuMont Television Network. The Captain was the first action hero specifically invented for TV and the show was the first regularly scheduled space drama on television. As with all things popular in pop culture, Captain Video was soon popping up in media outside the box. Fawcett Comics published a six issue comic book series in 1951, and Columbia Pictures produced a movie serial, Captain Video: Master of the Stratosphere, the same year. Admirers of the show could join the Video Rangers Club and buy stuffs like games, records, rockets, and helmets. Sponsors of the show offered mail-in premiums or free items in cereal boxes like rings, decoders, and small flashlights - all the items had cool special functions. And they are all treasures in today's collectors market.


Now, getting back to the T. Cohn Captain Video Superior Space Port. In her 2012 book, 1950s "Rocketman" TV Series and Their Fans, Cynthia J. Miller wrote this: 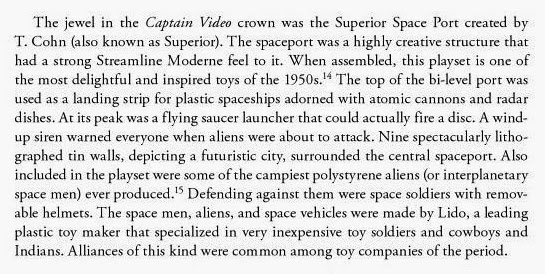 
As Toy Bop was coming together, one of its two largest sections became, space toys. In it, I wanted to include the most exciting and dazzling toys I could beg, borrow or buy. The Superior Space Port by T. Cohn was a toy that became a welcomed photo included in the book. Since then the playset has been safely tucked away over 20 years until now...This is a complete 75 piece set in near mint unused condition except for setting up for photos. First Toy Bop, then for this eBay ad. 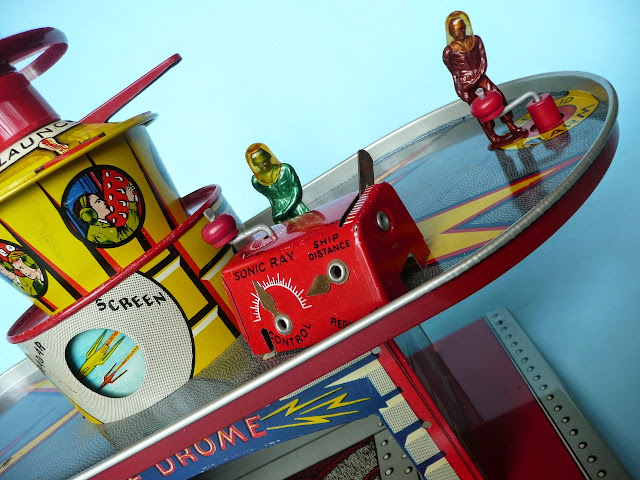 Back in the day, the complete T. Cohn Superior Space Port sold for $5.39. This particular set's Buy Now price is $1,250.00. Tom Frey: This dazzling Superior Space Port is recommended for adult collectors to display rather than any age children to play with. Museum Quality indeed - you can even find one in the Smithsonian National Air and Space Museum on display in the James S. McDonnell Space Hangar at the Steven F. Udvar-Hazy Center, Chantilly, VA.