This auction goes live at 10:00 AM PT today, 10 December 2015. It was hoped that this post would be up before the day but other things did not permit. The items below are just a few of interest. The comments about them are what might be considered for each one. Unfortunately, a strick budget prevents myself from jumping in to the bidding fray so I'll just blog about it. If you're catching this post in time, like any of the items, and you've got cash to spare, the auction is live at liveauctioneers - to get there click here.

This is 'The New Astro Boy' ('Shin Tetsuwan Atomu') battery-operated figure based on the 1980 animated series and manufactured by Yone, Japan for the Japanese market in 1981. He's 9" tall, made of hard plastic, can walk on a hard surface, or he can hang from the ceiling by a connection on his belt and fly around propelled by an add-on propeller that attaches to the bottom of this feet. This Astro Boy is hard to find with all the parts and the original box. Like almost all listings for this auction, the seller doesn't provide a lot of details on the item. The starting bid of $450 is a bit on the high end but considering how hard he is to find it may be a worthwhile investment for an Astro Boy collector (and there are a lot of them).

The 1973 Corgi Batmobile with Batman & Robin in the first black tire 'whizzwheels' version.

This looks like an outstanding example of this Corgi classic. The car and box appear mint. The seller has even left the contents of the instructional envelope intact. The estimate for this item by the seller is $1,000 – $1,100 with a starting bid of $850. That's pretty close to what you'll find for the 1973 Corgi Batmobile with collectors. It may be just a tad on the higher end but this particular example might be worth it. I did locate an eBay listing for $474.19 (including shipping) here. That's a big savings and although it's in good shape it doesn't impress as much as this example.

The 1969 Remco Voice Control Astronaut Base 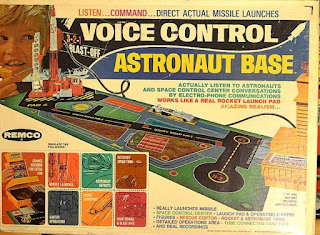 This is a difficult set to find in complete and working condition. Besides including figures, vehicles, a helicopter, and a working rocket launchpad, the command center building doubles as a neat record player. Two records feature actual NASA recordings that can be listened to with the 'Electro-Phone' headset. The estimate is $500 – $600 with a starting bid of $400. I saw a complete set sell on eBay for $130 relatively recently but that is a very rare occurrence. This Astronaut Base is a Space Age gem and would be worth inquiring about with the seller.

A very prized vintage robot. The starting bid is $1,950. That's pretty competitive with the average collector's value, if the betting doesn't drive it up too high. Below is a photo of ST1 with the trolley from Strenco manufactured in 1956. So much super. 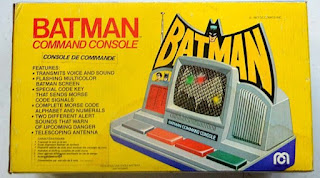 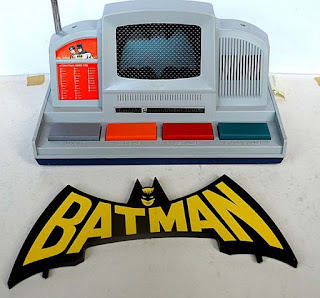 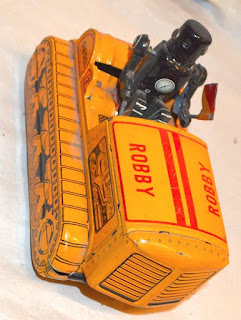 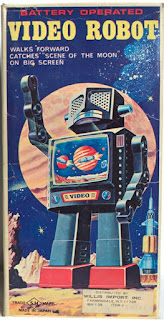 This is a listing that would be so much better if there was a photo of the actual robot. Apparently there are two styles of this Horikawa video robot. The two are pictured below. The robot on the left has 'VIDEO' under the screen. The robot on the right has dials. Mr. Mercury at the Collecting Toy Robots site believes that the 'VIDEO' robot is more in keeping with the original box which suggests that it's the earlier one. 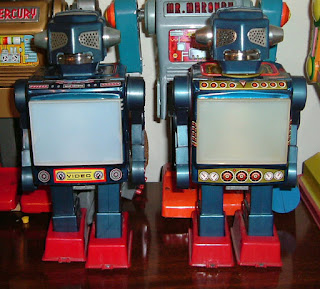 Strangely,  although the 'VIDEO" robot is seen less frequently, I find that the robot with the dials is more often than not more expensively valued. Whichever the case, this is a listing I would definitely consider - if I had the moola. I've wanted one for a while. Just look at this...ponder the coolness of the 'video': 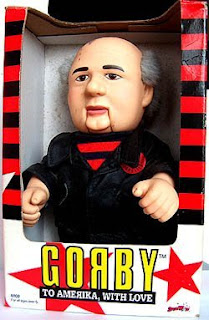 A vinyl version of Mikhail Gorbachev, former President of the Soviet Union from 1990-1991. When his stomach is squeezed his mouth mouth moves up and down. Historical and too cute - complete with topside birthmark. The starting bid is $150. You can save lotsa dollars by grabbing this one on eBay for $24 (including shipping) here. 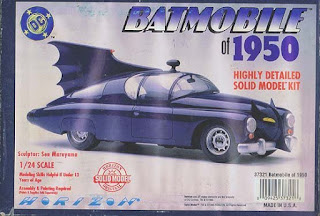 Great sculpt based on the 1950 DC Comics way cool Batmobile design. High detailing makes for a fun model to assemble. Starting bid of $120 is competitive with a common 'buy now' price of $150 - $170. 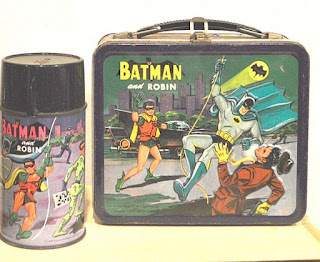 Good condition. Starting bid of $350 on the high side but not by that much. 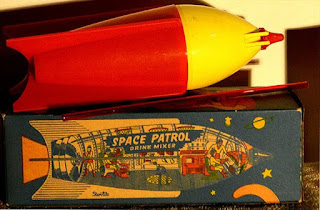 Another interesting listing. This Space Patrol Drink Mixer looks very sturdy and the red/yellow colors are fab. It's the one I've seen a couple times in the past. Recently another version's been popping up. It's made out of a see-thru pink plastic with a clear plastic straw included. The one below is up for sale here on eBay for $125. I'd personally want the red/yellow rocket as it displays nicer and seems more heavy duty - this one has a starting bid of $250. Although not knowing about the differences between the two I would definitely inquire with the seller.. 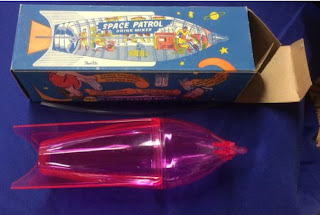 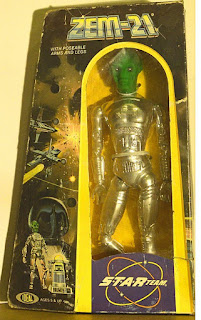 This was the Ideal Toys' Star Team universe answer to C3P0. He's intended as a companion to the ZEROID robot. The vinyl plastic head design really makes ZEM-21 way cool. The original window box looks a bit worn but the humanoid looks in good shape. The estimate is $100 – $150 with a starting bid of $74. A very lightly used ZEM-21 with a near mint window box is selling on eBay for $80 (including shipping) here.

So there ya have it. Some neat stuffs in the Laurie Maoz XX C Toys Auction Part II. There are 792 items in this auction, if you want to check out the others you can view them at liveauctioneers by clicking here.
Posted by Unknown at 11:22 PM