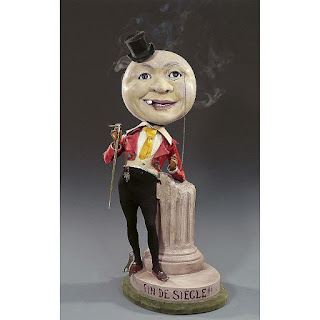 
Depicting a young man with large full moon face leaning against a fluted column, a cigarette between his lips and a walking cane in his right hand, with plaster-composition head, articulated brown glass eyes and wire monocle, dressed in burgundy satin tailcoat, cream silk waistcoat, yellow tie and pointed shoes.

The figure tilts his head from side to side, rolls his eyes and twirls his cane as he inhales from a lighted cigarette placed in the holder and blows the smoke out through his nose. 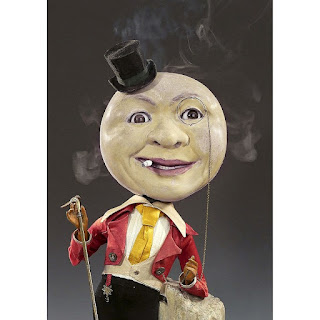 The 'Lune Fin de Siècle' - one of Vichy's most recognisable automata - draws on the popularity of the moon as a motif in French literature and visual culture during the late 19th and early 20th century.

Gustave Vichy and his son Henry both used the face of the 'Lune Fin de Siècle' as a registered trademark on the company's letterheads, labels and advertising. The original model may have been sculpted by Henry Vichy himself. Certainly the figure shows signs of Henry's influence, including the shapely modeling of the slender body and a sense of the unexpected in the large round head that appears to rest upon it. Another indication of Henry work is the pencil date "9.12.91" found on the figure's bedplate (sic?). 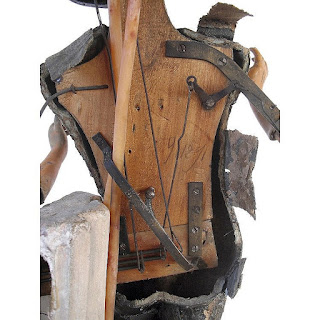 All operated from electric motors but many (including the 'Lune Fin de Siècle') also retained their original clockwork motors inside the cabinets. According to an article published by 'Edición del Domingo' on 19 August 1990, the automata exhibit closed in 1957. The park closed its doors to the public in around 1991 and the bulk of the building was demolished. The Apolo's collection of automata and mechanical effects was eventually dispersed amongst La Fira bar in Barcelona, the Museu de Joguets i Autòmats in Verdú and a well-known antique doll specialist in the South of England. The automaton [shown] here has been restored to full mechanical function at the House of Automata in Forres, Scotland.

To read a bit more about this outstanding automaton, as well as view pics of the clockwork and pneumatic system, click this link to get to the Invaluable auction listing. On 7 November 2015 this Lune Fin de Siècle sold for €135,264 ($145,004). Below is a video of the fine Dandy at work.

- Original descriptions and photos found in the Invaluable Auction listing -