The Jetsons and Space Age Googie - Imagining A Whimsical Future

Life in 2062 when folks are living the high life - literally. Nearly every student of the future knows that when it comes to that whimsical techno-utopian age to be, the family to watch are the Jetsons. Even television itself stepped into the future when The Jetsons hit prime time on ABC-TV as the first program ever broadcast in color in 1962.

Now, getting to the high life. The family Jetson reside in Orbit City. Orbit City has all the accommodations you'd expect in a cosmopolitan sort of place - but they're all raised high above the ground. The architecture designs echo mid-20th century space age mod Googie style: sweeping arches and upswept roofs, large domes, boomerang, amoeba, and palette shapes, atomic symbols and motifs, flying saucer shapes, and of course, the starburst.

Below is a selection of images that highlight the man-made environs of Orbit City.

After daily activities there's always somewhere to hang out during the evenings:

But the Jetsons also have getaways from their fair city:

When Jane and George decide on a second honeymoon, Las Venus is their choice. It's a super getaway spot for the couple and as with the Las Vegas of the 50s it has its share of temptations:

Back in Orbit City, a look at the structures that house the media:

Here are just a couple other residences away from the metropolitan area of Orbit City:

And finally, below are a few shots of life on the ground. Paradoxically, two of them are things you'd most associate with  the sky:


The final image brings us all down to reality. At the lower levels of Orbit City reside the poor. The 'hobos and the layabouts.' In The Jetsons' seventh episode the character pictured below steps in briefly to give a punchline for a joke. Perhaps Hanna-Barbera meant this a a dark punchline in a general way as well - even with all the amazing gadgets and gizmos of 2062 poverty will still be with us. But while those who have are living the high life, those who have not (for whatever reasons) will be below out of sight and out of mind. 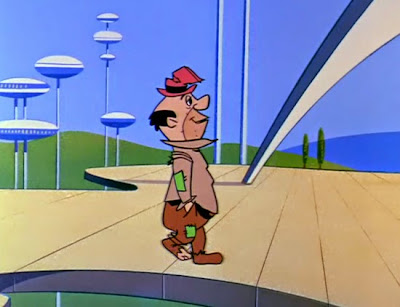 The Googie style began in Southern California in 1949 when designer John Lautner created the new look for Googie's coffee shop at the corner of Sunset Boulevard and Crescent Heights in Los Angeles. The style caught on and was soon used in designs everywhere. Where it really stood out were the gas stations and motels developed along American highways - Googie represented the Space Age and all of its promises realized in a visible way, it captured the imaginations of the new travel culture that developed post-WWII. The more conservative and pretentious architects and designers had - and have - ridiculed the designs complaining that they were garish and too vernacular to be taken seriously. The style faded after about twenty-five years. Much of the structures and signage have been dismantled and destroyed. There are groups of people who have begun to appeal for the preservation of those places that still exist - they point out that these are important visual reminders of an important era in U.S. history.

If you'd like to see and read more about Googie be sure to visit Googie Architecture Online - it's a marvy site and a great reference.
Posted by Unknown at 9:48 AM